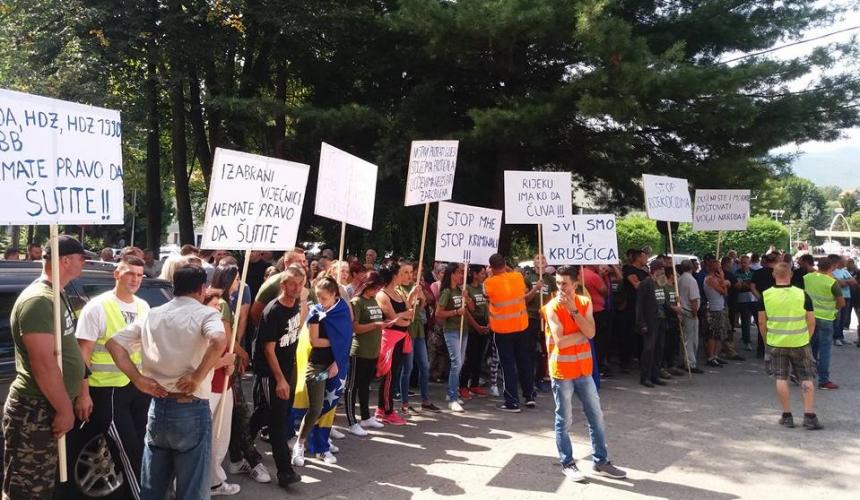 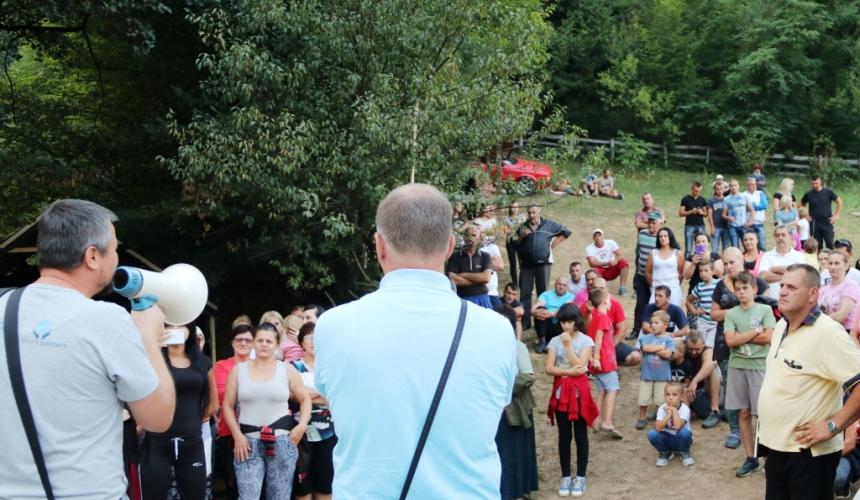 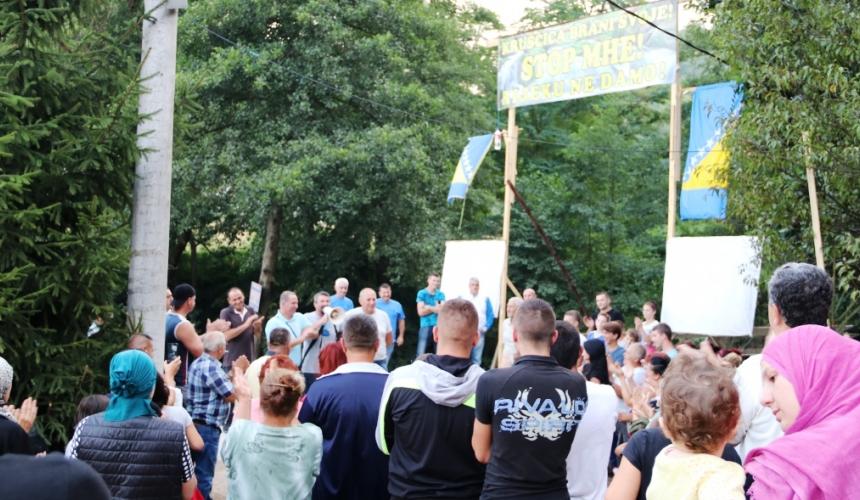 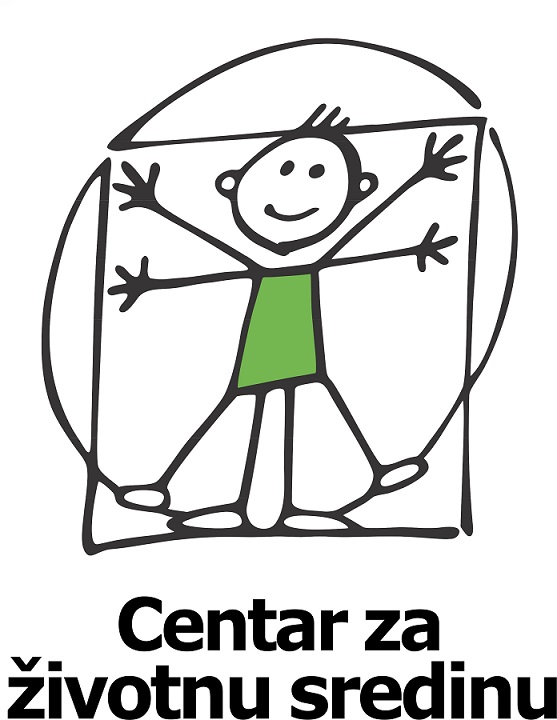 Banja Luka, 24.8.2017. This morning at the crack of dawn, riot police violently removed anti-hydropower protestors in the village of Kruščica near Vitez, Bosnia-Herzegovina, causing serious injury to several people (find video HERE). The protestors neither provoked nor resisted the police but were nevertheless forcibly removed in order to allow access over a bridge for construction equipment to pass. After the removal, several of the protestors were arrested and questioned. Several of them also sought medical help.

Kruščice residents have for the last month been peacefully protesting against Kruščica 1 small hydropower plant, whose construction is to take place in the planned Kruščica Nature Park. This is one of a series of residents' groups who have been resisting hydropower in Bosnia-Herzegovina during the last few years, for example in Kotor Varoš and Fojnica.

Viktor Bjelić stated on behalf of the Coalition to Protect Bosnia-Herzegovina's Rivers that „Today's incident shows that citizens of Bosnia-Herzegovina are not protected by the authorities and that monstrous incidents such as this one can happen even to women and children. The residents of Kruščice are defending their right to a healthy environment and the right to water as basic human rights, while the investors and those defending the investor's interest have only a profit motive. Obviously private interest is considered more important than public interest, as this morning's incident shows, as well as the fact that the protestors were removed before five o'clock in the morning by special police units funded by the people of this country.

It was clear that the real aim of this action was to clear the way for construction and not to enable the flow of road traffic since the construction company and machines were immediately behind the police lines and were able to cross the bridge to the location where the hydropower plant is planned as soon as the people had been „removed”. We condemn such actions against the people of Bosnia-Herzegovina, carried out to protect those who make and implement decisions harmful for people and the environment.

The Coalition to Protect Bosnia-Herzegovina's Rivers will call for help from colleagues across Bosnia-Herzegovina and the region to take legal action, as this is clearly a violation of the right to public assembly, freedom of expression, and the right to a dignified life. We will also highlight this as a case of repression of activists at the forthcoming Conference of the Parties to the Aarhus Convention in Budva ( Article 3, paragraph 8 of the Aarhus Convention states that every Each Party shall ensure that persons exercising their rights in conformity with the provisions of the Convention shall not be penalized, persecuted or harassed in any way for their involvement.). The Convention stipulates that authorities must protect their citizens against any kind of repression.”

Citizens of Kruščica protect their river

Banja Luka, 17.8.2017.The Coalition for Preservation of Rivers in Bosnia and Herzegovina is providing support to the Kruščica local community, who aren’t giving up on their fight to protect their river from the construction of two small hydropower plants. On August 16th, representatives of the Coalition held a meeting with members of the local community board who are on call 24/7 trying to keep the developers from moving their equipment into the riverbed and beginning demolition.

Representatives of the Coalition for Preservation of Rivers in Bosnia and Herzegovina are supporting this bold action by the local community. These community members are pointing out that only they know how important this river is to them. Their lives in this place depend on this river. If it is destroyed by building power plants, some of their basic human rights (such as the right to fresh water) are compromised and given to a private company whose sole purpose is draining every drop for making electricity and profit.

“According to the 2005-2025 spatial plan of Vitez municipality, this area is planned for conservation as a protected landscape. Unfortunately, in 2015 this spatial plan suffered a lot of changes and additions. Specifically, two objects in the area of river Kruščica - small hydropower plants Kruščica 1 and Kruščica 2 - were added, even though licences have not been approved. It leads us to think that the changes to the spatial plan were made exclusively to allow for these hydropower plants. Was there a public hearing about these issues? We would have to ask the authorities about that. Once again it shows that with political resolutions and pressure power plant developments that are not compatible with nature protection could proceed.”, says Viktor Bjelić from the Center for Environment.

“We were in the Željeznica river canyon in Fojnica for 325 days and nights, guarding and protecting the river against the same threat faced by our friends from Kruščica. We had significant public support and we could also always count on advice and support from the people from the Center for Environment with whom we formed the Coalition for Preservation of Rivers in Bosnia and Herzegovina. To citizens of Kruščica - we recommend not giving up and to stay united, and know that the Coalition will help them to reach their goal just like we did in Fojnica.”, said Robert Oroz, president of Eco Gotuša, during the meeting.

“River Kruščica is a significant potential tourist draw to this area, and we think that the development of tourism would bring new jobs, unlike power plants which we know employ only one person or no one at all as they are completely automated. We want only tourism developments which won’t lead to destruction of this clean and drinkable river.”, said Haris Hurem, a citizen of Kruščica.

It is crucial to note that for almost a month now a couple hundred citizens in this area have been defending this river. They have informed the developers that they won’t give up, they will fight with everything they’ve got to keep this river intact. The Kruščica River springs from a number of sources on a mountain of the same name. It flows through the municipality of Vitez and into the Lašva River. The importance of this mountain river is the fact that it provides the citizens of the Vitez municipality, and a large part of Zenica, with drinkable water. The planned power plants would jeopardize  that, as they are located in the protected area of the Kruščica spring. This river provides favourable habitats and spawning grounds for river trout, a species which is very sensitive to changes in its environment. This could lead to it’s extinction - which is a definite outcome if these power plants were to be built.