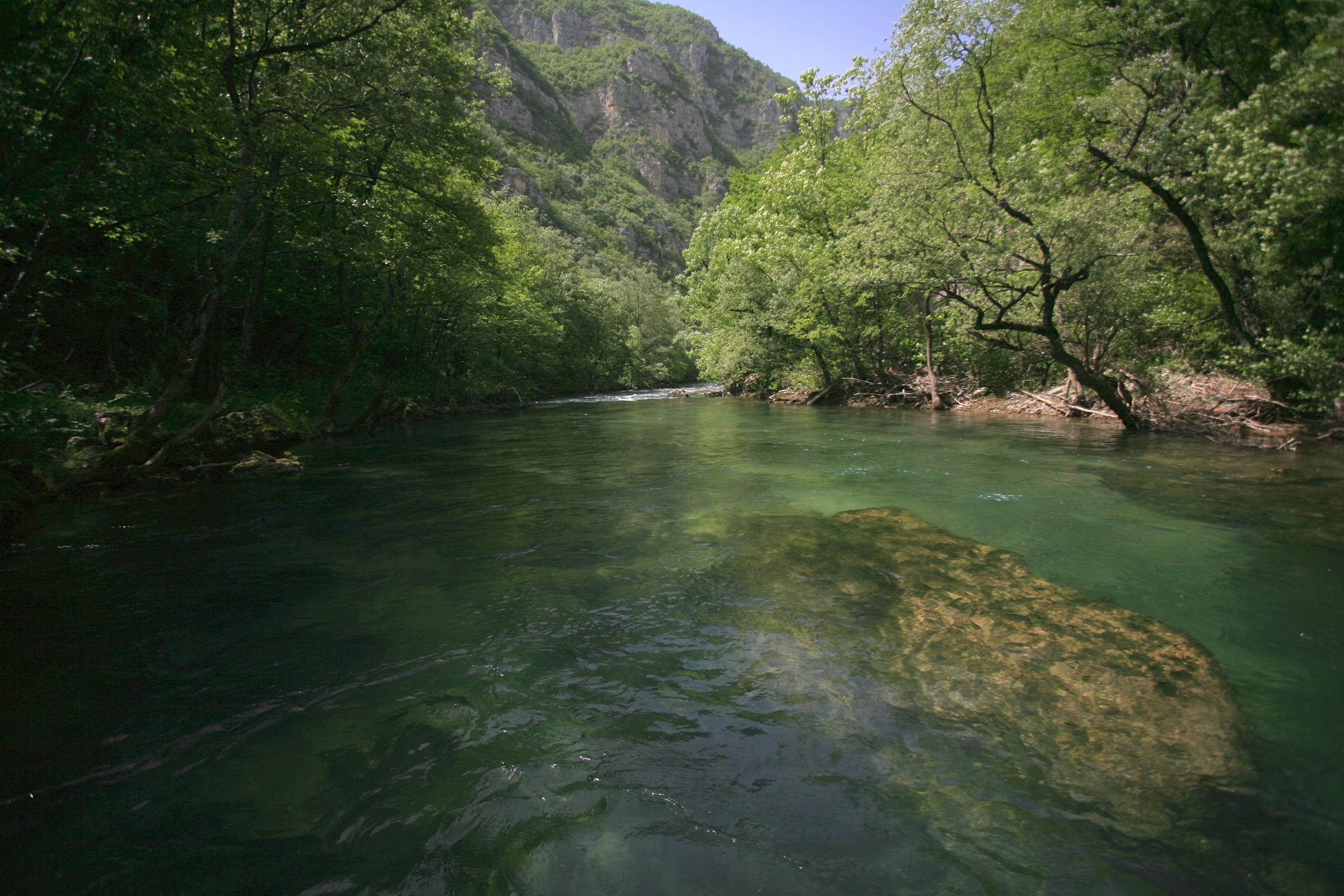 ++The Austrian-German energy company is constructing a hydropower on the Sana River, endangering a globally threatened fish species ++ NGOs and scientists protesting++

The Sana river, one of the six most important rivers for the Huchen. Credit: Luka Tomac

Banja Luka, Vienna, Radolfzell, November 27, 2015. The energy company Kelag is about to destroy one of the most important river sections for the endangered Huchen (Hucho hucho) in Europe. This has been brought to public attention by environmentalists and scientists at a press conference in Banja Luka today, organized in the context of the international campaign “Save the Blue Heart of Europe”. The company is currently constructing a hydropower plant at the upper reach of the Sana in Bosnia-Herzegovina and further dams are planned downstream. According to the assessment of scientists, the Sana River is one of the six most important rivers for the globally threatened fish species. “Together with only a few other rivers, the Sana provides the backbone of the remaining Huchen population in Europe. These rivers must remain unobstructed by hydropower plants”, says Belma Kalamujić from the Sarajevo University. The Huchen expert signed a letter of protest of concerned scientists in regards to the Medna project, addressed to the government of the country as well to the EU commission.

For years, nature conservation groups from Bosnia-Herzegovina have been fighting the destruction of the Sana together with residents “not only due to ecological, but also economic concerns. Fly fisher from all over the world are visiting to fish trouts, graylings, and most of all the Huchen in unspoiled nature. Residents can profit from this tourism without destroying the landscape” says Nataša Crnković from the NGO Center for Environment. This source of income would be a thing of the past if the hydropower plants were constructed.

While Kelag is destroying the healthiest Huchen occurrences on the Balkans, millions are spent to regenerate rare Huchen populations in the EU and especially in Austria.

According to research by Riverwatch, about 45 million Euro have been invested in the restauration of rivers with Huchen occurrences in Austria since 1999. This includes the removal of embankment construction and other artificial obstructions in order to give the rivers space. Alone in Carinthia – where Kelag is located – 13.42 Million Euro were spent.  Even the Verbund group, co-owner of Kelag, is financing a river restauration project on the Traisen river in Lower Austria with 6 million Euro in order to regenerate Huchen populations. All these projects are co-funded by the EU (Life Projects).

“If this weren’t so dramatic, it would almost be worth a laugh: while millions are spent to fix the mistakes of the past in Austria and other EU countries, companies like Kelag are making the same mistakes all over again on the Balkans and are destroying the best rivers as well as rare, threatened species. This needs to stop”, demands Ulrich Eichelmann from Riverwatch.

“We need a masterplan for the protection of the most valuable river from hydropower development in Bosnia-Herzegovina. Rivers with Huchen occurrences must be off limits for dam construction in any case”, concludes Nataša Crnković.

The Huchen is one of the most popular and impressive river fish species in Europe. It was the “Fish of the year” in 2015 in Germany and in 2012 in Austria. It can grow as long as 1.5 meters and lives only in the Danube catchment and nowhere else in the world. The species needs fast-flowing, cool and gravel-rich rivers. While only few small populations exist in Germany, Austria and some other countries, the rivers in the Balkans provide habitat for the last remaining bigger populations of the Huchen. However, a Huchen study commissioned in the context of the “Save the Blue Heart of Europe” campaign shows, that 93 hydropower plants are projected in river stretches with Huchen populations in the Balkans, even though the Huchen cannot survive in rivers obstructed by hydropower plants. The Medna project is the first one under construction.

The owners of Kelag (Carinthia energy stock company) consist of the Province of Carinthia, the Austrian Verbund Group, as well as of the German RWE (Rhine-Westfalia Power Plant PLC). At the Sana, the Kelag is operating under the company name “Interenergo” based in Ljubljana/Slovenia. Interenergo is 100% owned by Kelag. To date, Slovenia has invested 1.1 million Euro in the protection of Huchen populations.

Save the Blue Heart of Europe campaign:

The hydropower projects on the Sana River constitute only one wave of a true dam tsunami that is putting Balkan Rivers at risk. About 2700 new dams are currently projected between Slovenia and Albania. In order to counteract this spate of destruction, ‘EuroNatur’ and ‘RiverWatch’ have launched the “Save the Blue Heart of Europe” campaign in cooperation with local partner in the respective Balkan counties. Find out more here: http://www.balkanrivers.net/