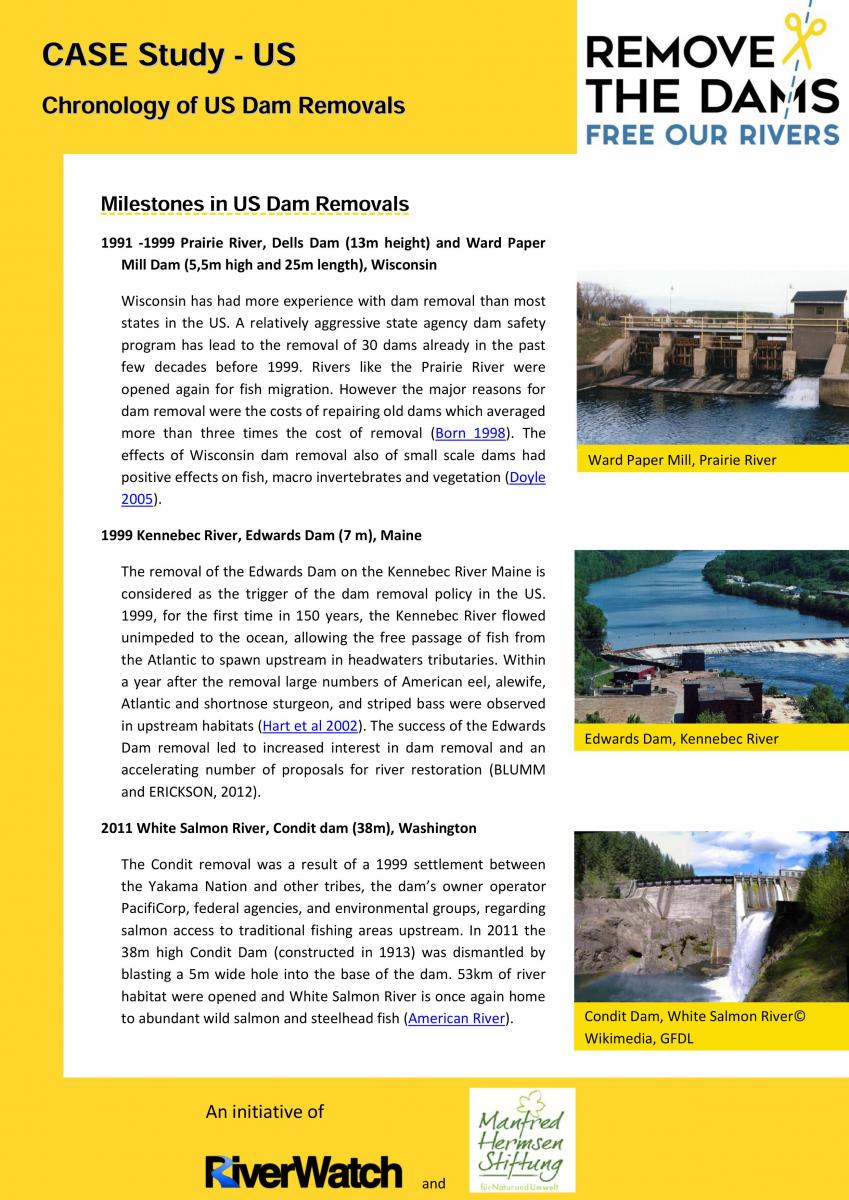 In the US, dam removal for river restoration has been implemented on a large scale for many years. During the Clinton presidency (1993 to 2001), environmental protection has gained political popularity and dam removal was recognized as a viable river restoration method. The year 1999 marked a major event in the US dam removal history: it was the first time that the federal government ordered the destruction of a dam (Edwards Dam 7m height, Kennebec River, Klein 1999, Maine) despite the objection of its owner!

Key data of the US Dam Removal Movement:

For further information on the US dam removal movement, find our Case Studies: 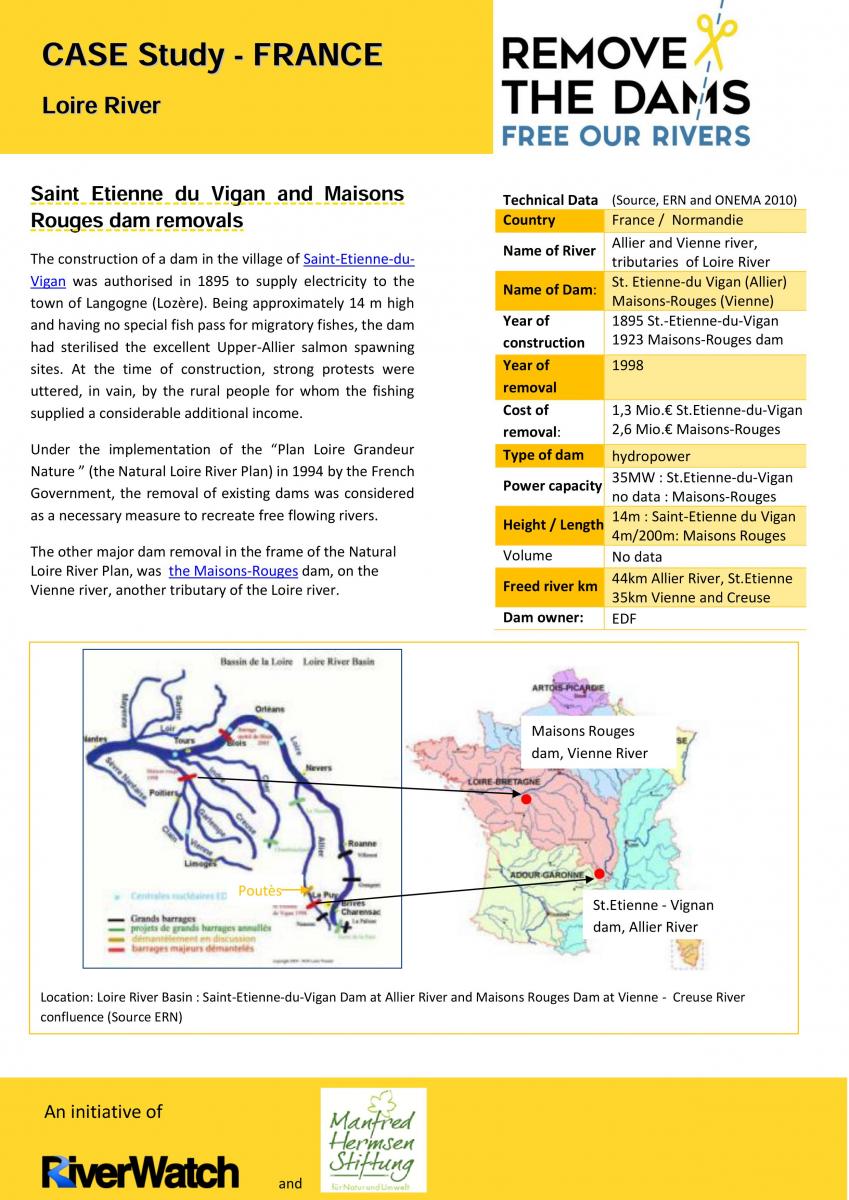 In France, dam removal started in the mid-1990s, triggered by the shocking collapse in the populations of migrating fish, in particular the Atlantic salmon. Between 1996 and 1998, three larger dams (Kernansquillec Damm/ Léguer River, St. Etienne-du Vigan Dam/Allier River and Maisons-Rouges Dam/Vienne River) were removed in the Loire River basin (see Case Studies France), many others followed. According to experts’ estimations, approximately 1,800 dams have already been removed in France. The “SOS Loire Vivante” campaign on the Loire and its tributary Allier played an important role in the French dam removal movement. In the year 1989, several hydropower plants were planned to be constructed in the Loire Valley and its tributaries. Under the “Loire Vivante” many well-known national and international environmental organizations joined their forces to prevent the construction of these plants. After years of construction site occupation, demonstrations, successful lawsuits and intensive awareness rising in national and international media, the construction plans were stopped and the restoration of the river system was decided instead. In 1998, the “Plan Loire Grandeur Nature” – a river restoration and protection plan for the Loire basin – was enacted. This plan prohibited the construction of new dams. Furthermore, the plan stipulates the successive elimination of existing barriers in the river basin in order to establish a free passage of Atlantic salmon and other fish species.

Further information on the French dam removal movement can be found in our Case Study or on the ERN website: 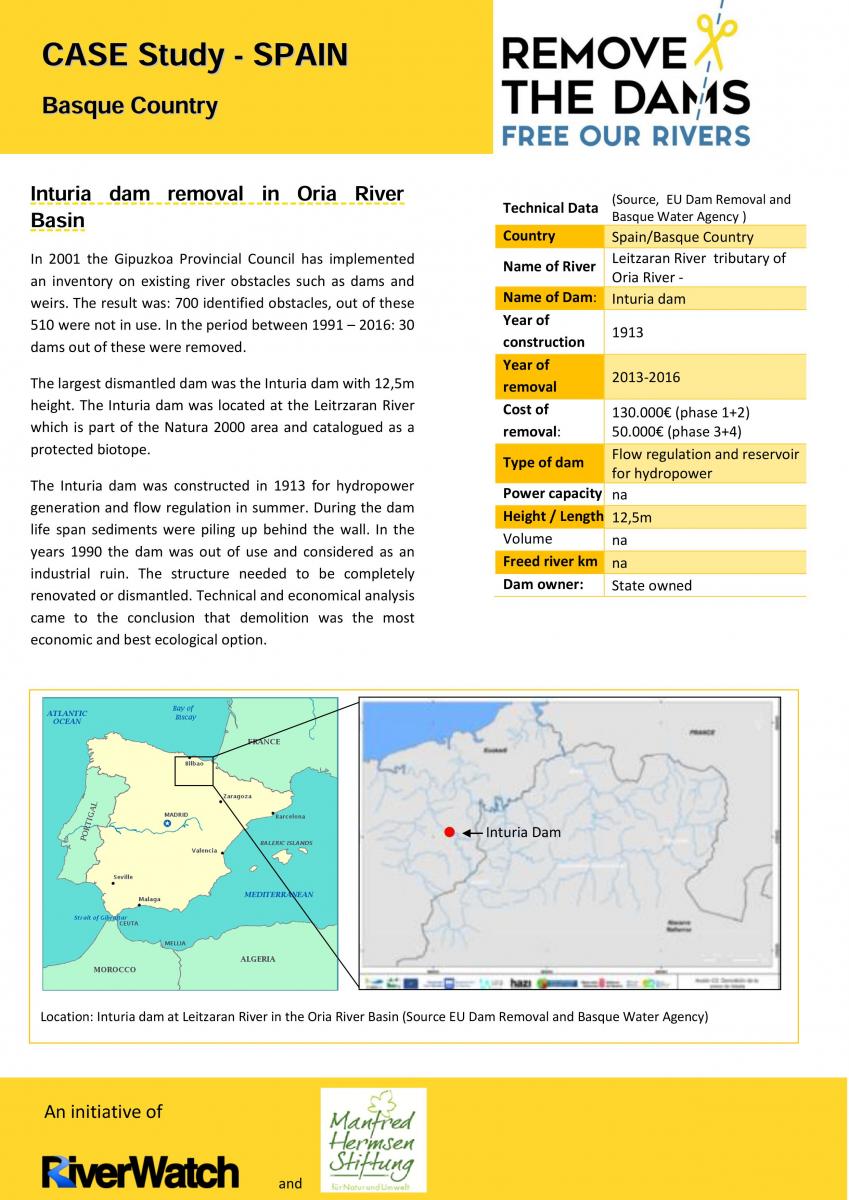 In Spain, as in other EU countries, the re-establishment of rivers’ connectivity is a legal obligation according to the EU-Water Framework Directive. The Spanish government is supporting the removal of existing barriers which are out of use and where water permits are expiring. According to experts’ estimates, over 200 dams have been removed in Spain so far:

Further information on Spanish dam removals can be found in our Case Study : 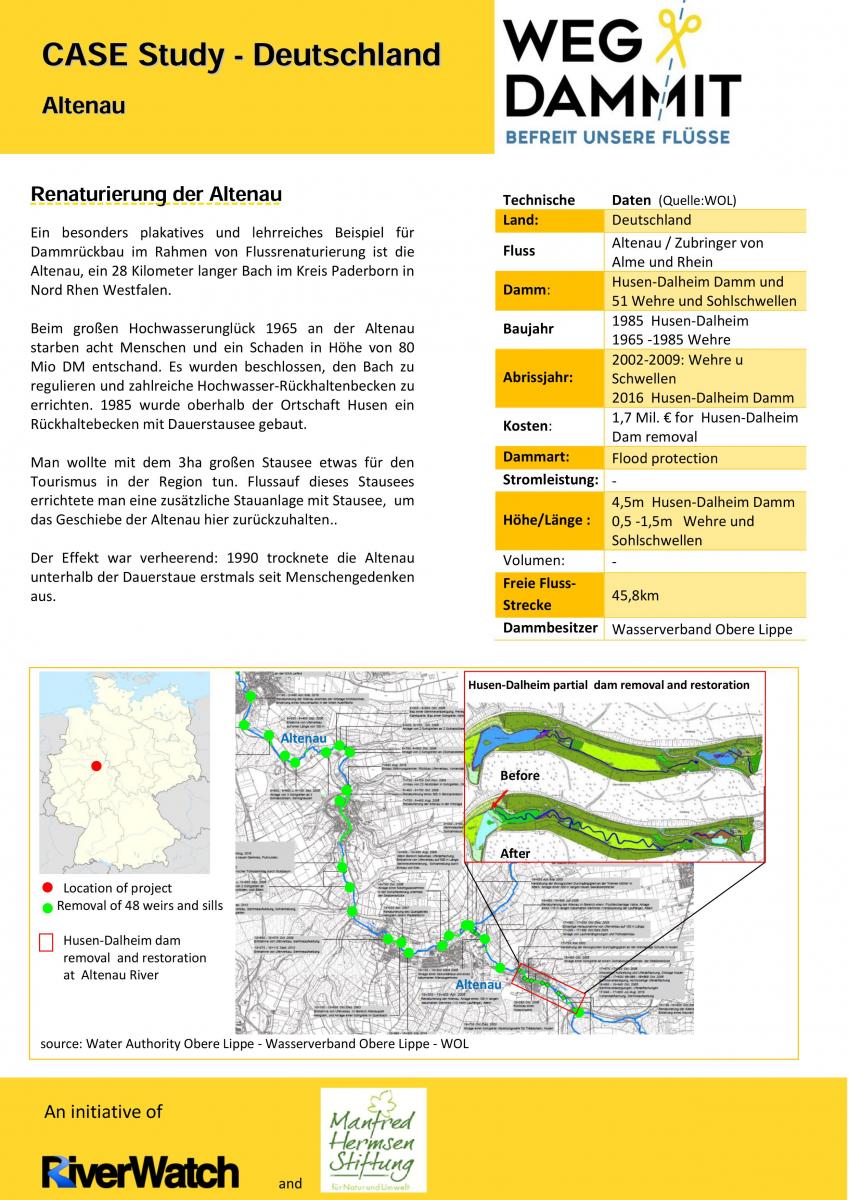 In Germany, dam removal has been implemented as restoration measure particularly for small dam such as weirs or sills. In total 5,150 measures to mitigate the loss of connectivity caused by barriers are planned, according to the UBA (Environmental Agency 2016). Not only dam removals but also the equipment of existing dams with fish passages is counted amongst these measures. These fish passages have however a rather low success rate (more information on this topic in the Conceptpaper). Detailed data on the number of removed dams is not available; experts estimate that approximately 1000 small dams have already been removed.  A particularly striking and instructive example of river restoration in Germany is the restoration of the Altenau River, a 28 kilometer long stream in the district of Paderborn in North Rhine-Westphalia.

Further information on German dam removals can be found here (currently only in German):

In the US, many States already have dam removal guidelines. One example is the Guidebook for Dam Removals by American Rivers

Database on dam removals in Europe

The Dam Removal Europe Initiative is generating a database of dams removed in Europe. Data from dam removals in Spain, UK, Sweden and Finland have already been uploaded and are displayed in a map. Our campaign will contribute dam removals data from our project area in particular the Alpine and the Balkan region.

Number of dams and barriers in Europe

According to the European Environmental Agency Report (EEA Report No 8/2012), there are several hundred thousand barriers and transverse structures in European rivers. Some of them are large dams for hydropower production or irrigation storage reservoirs, but the majority is comprised of smaller obstacles like weirs, for example old mills or sills for flood protection.

Currently, an obstacle is located per every second kilometer in Germany, every kilometer in Austria and every 650m in Switzerland! These obstacles are disrupting the free flow of our rivers and are trapping sediments, fish and aquatic organisms into disconnected pools.

The report of the European water assessment can be found here: EEA report 2012

Large Rivers of the Danube Basin

In the Danube Basin, a total of 1,688 barriers are located on large rivers with catchment areas greater than 4,000 km². Out of these, only 756 are currently reported as being equipped with functional fish migration aids. Therefore, 932 continuity interruptions (55 %) remain a hindrance for fish. (ICPDR, 2009, Source EEA report 2012) The effects are disturbing: eel, grayling, salmon, huchen, sturgeon and many other species are highly threatened, not to mention the sensitive water insects (macrozoobenthos).

In Germany there are currently thought to be some 200,000 transverse structures. In relation to the overall length of Germany's network of watercourses (approximately 400,000 km), the continuity of rivers is therefore interrupted by a technical structure at around every second kilometer. (UBA, Deutschland 2016) In Austria there are around 34,000 barriers in river networks with a catchment area greater than 10 km². Out of these, 2800 are small hydropower plants, the majority of which (70%) is not equipped with fish ladders. Currently, barrier mapping surveys are implemented in different regions of Austria and it is likely that the number of barriers will increase as small rivers will also be included in the surveys. In the frame of the implementation of the National River Basin Management Plan 2009, about 1000 barriers were opened for fish migration. As dam removal has not yet been implemented in Austria on a large scale, the majority of obstacles were equipped with fish ladders and only a small portion of weirs and sills was actually removed. The high density of fish barriers (a barrier per every kilometer) has led to the extinction of all long distance migration fish species and nearly all (12 out of 14) mid distance migration fish species have been listed as endangered fish species. (NGP 2015)

In Switzerland, there are approximately 100,000 artificial barriers above 50 cm in height (FOEN 2010b). Out of these, 538 are large hydropower plants and approximately 1,060 small hydropower plants. The average length of an unobstructed stretch of river is 650 m, with the number of barriers per river – kilometer ranging between two (Canton Bern) to eleven (Canton Zurich). Eight species (fish and lamprey species excluding whitefish) have become extinct. Furthermore over 30 % of known whitefish species have become extinct. (EAWAG, 2010, EEA report 2012)

In France, more than 60,000 structures — dams, locks, weirs and mills — have been recorded in the national barrier database. It is estimated that the river networks are affected by a total of 120,000 transversal structures. In some catchments such as the Upper Rhine and Rhône River, the density of obstacles is extremely high, with more than 200 obstacles per km². (ONEMA 2011, EEA report 2012)

Database on existing barriers in Europe

The World Fish Migration Foundation and WWF from the European Dam Removal movement are participating in the AMBER– Adaptive Management of Barriers in European Rivers Programme. One of the principle outputs of AMBER is to develop an European obstacle atlas in order to establish a common framework for barrier mapping. This data set can be used as a working basis in search for suitable dam removal candidates.