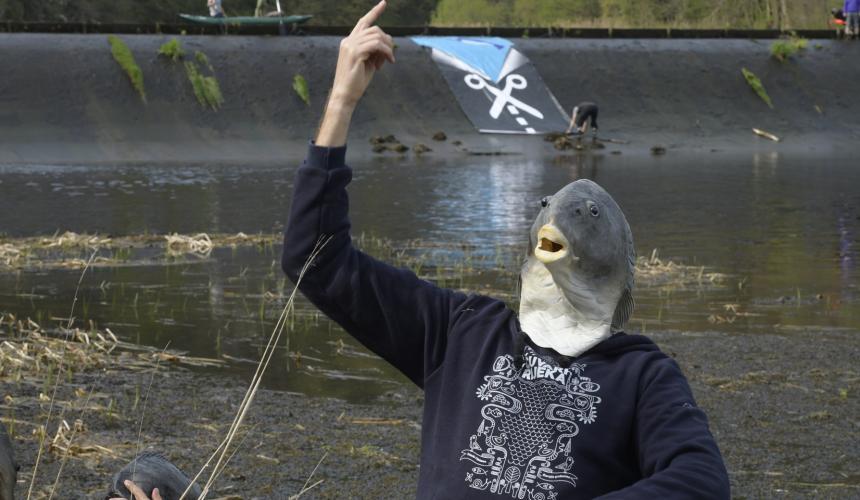 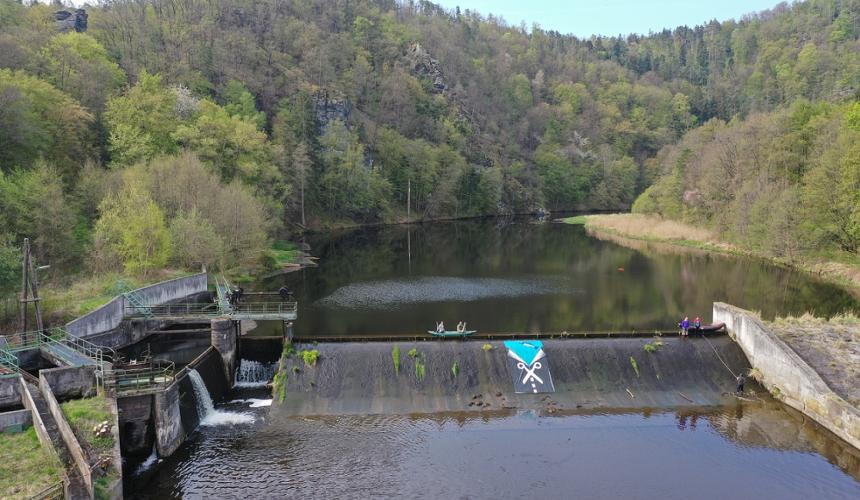 Rosenburg/Kamp Valley, April 30, 2022 - The aging Rosenburg power plant has long been a thorn in the side of conservationists. Now, according to plans of the energy company EVN, it is to be replaced by a larger power plant - with massive ecological consequences for the entire Kamp Valley. The "Kamp Days" therefore focus on the demand for a restoration of the middle and lower Kamp Valley and a complete removal of the existing powerplant. (See video recording below)

"In order to combat species extinction and the climate crisis in equal measure, we need intact waters and living nature. Today, the Kamp River is obstructed in many places and interrupted by weirs. As a result, the once large fish stocks as well as the abundance of insects has collapsed. With the removal of the Rosenburg power plant and further restoration downstream, the Kamp can once again become a paradise for many endangered species - and thus also a jewel for local tourism," demanded the representatives of the citizens' initiative Lebendiger Kamp, the Naturschutzbund NÖ, the NGO Riverwatch and WWF Austria. They presented a "Vision for a Living Kamp" on the occasion of the meeting.

The Kamp Days, held on April 29 and 30 in Rosenburg, Lower Austria, are an international symposium with a focus on the future of the Kamp and its valley. Renowned experts from the USA, Finland, the Netherlands and Austria presented examples and experiences from the field of "dam removal", i.e. the dismantling of transverse structures in rivers. More and more dams are being removed around the world - to free up rivers, allow fish and other creatures to migrate again, improve groundwater levels and quality, and create new recreational spaces for people. To date, nearly 2,000 major weirs have been removed in the U.S., and in Europe, as many as 5,000 dams (including smaller bottom sills) have been removed over the past 20 years.

Engineer Laura Wildman of Biohabitats (USA) is one of the leading experts on dam removal in the USA. She has been involved in the demolition of over 100 dams. "Even in the US, dam removal sounded crazy to many at first, but today it is accepted as a common method. More and more people are recognizing the many benefits for people and nature," Laura Wildman reported at the event. The movement has long since made its way to Europe. Some 5,000 dams have been removed in the last 22 years, including hydropower plants. Herman Wanningen, director of the World Fish Migration organization and initiator of Dam Removal Europe (www.damremoval.eu), said: "Removing dams is the most effective measure to revive our rivers, especially for fish stocks. We have long forgotten how many fish there once were in our rivers. By opening up our rivers, like here at the Kamp, we can give these species back some of their habitat."

Sampsa Vilhunen from WWF Finland: "A few years ago, dams were only seen as energy producers. But now people also see the negative effects, such as the enormous loss of species. The results of the first removals have convinced most. In recent years, some 600 transverse structures have been demolished in Finland, 110 barriers last year alone."

The EU Biodiversity Strategy explicitly cites dam removal as an important measure to achieve European species conservation goals. A total of 25,000 river kilometers are thus to be restored across Europe by 2030. But in Austria, this message has not yet been received - around 28,000 barriers cut through the domestic waters. Apart from a few exceptions, hardly any dams or weirs have been removed. The aging Rosenburg power plant is an ideal candidate for deconstruction - but an EIA process is now underway for the planned construction of a new power plant by energy company EVN. "This project would further deteriorate the ecological condition of the Kamp River through the artificial deepening of the riverbed. Moreover, a higher dam wall would extend the reservoir, affecting valuable floodplains," explained Stefan Glaser of the citizens' initiative Lebendiger Kamp.

During a joint hike, the initiators of the Kamp Days demanded the restoration of the Kamp Valley with a huge banner on the dam wall and directed their appeal to the state of Lower Austria and EVN: "We need more living rivers in Austria, not fewer. By removing the weir at Rosenburg, the Kamp could once again become a living Kamp over a stretch of 20 kilometers, a little paradise for many endangered species. This makes more ecological sense and promotes the attractiveness and recreational opportunities in the region. In terms of energy production, Austria's rivers have long since done their duty. With 5,200 hydroelectric power plants, Austria has one of the highest power plant densities in the world. Instead of sacrificing even the last free flowing river stretches, Lower Austria should rather make use of the untapped solar potential”, so the organizers. Even if the EVN realizes this new construction of the power plant, the electricity yield would be negligible.  A larger amount of energy could be generated just by using the roof tops of surrounding industrial parks.

History of dam removal in the US - Laura Wildman, Biohabits, USA